Maglor tells of the Long Peace and the years of Elves and Men. A hundred years pass and both races have learned to live peacefully. He tells of the House of Haladin, saved by Haleth, who led her people in repelling an orc siege until Caranthir arrived with reinforcements.  He also tells of the settlements in Ladros and Dor-lomin, and the giving of the Dragon Helm to Hador from Fingon, and the arrival of the Easterlings over the Blue Mountains. 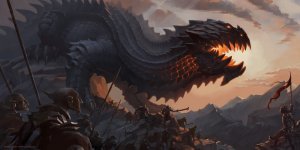 Adapted from chapters ‘Of Beleriand and Its Realms’, ‘Of the Coming of Men Into the West’ and ‘The Ruin of Beleriand and the Fall of Fingolfin’ from The Silmarillion and ‘The Grey Annals’ from The War of the Jewels.