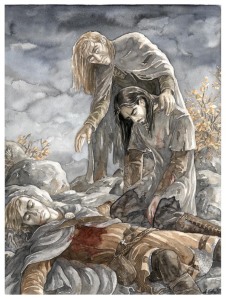 Adapted from chapters ‘Of Maeglin’, ‘Of Turin Turambar’ and ‘Of Tuor and the Fall of Gondolin’ from The Silmarillion, ‘Of Tuor and His Coming to Gondolin’, ‘Narn i Chin Hurin’ and ‘The History of Galadriel and Celeborn’ from Unfinished Tales and ‘The Land of Bow and Helm’, ‘The Death of Beleg’, ‘Turin in Nargothrond’ and ‘The Fall of Nargothrond’ from The Children of Hurin.